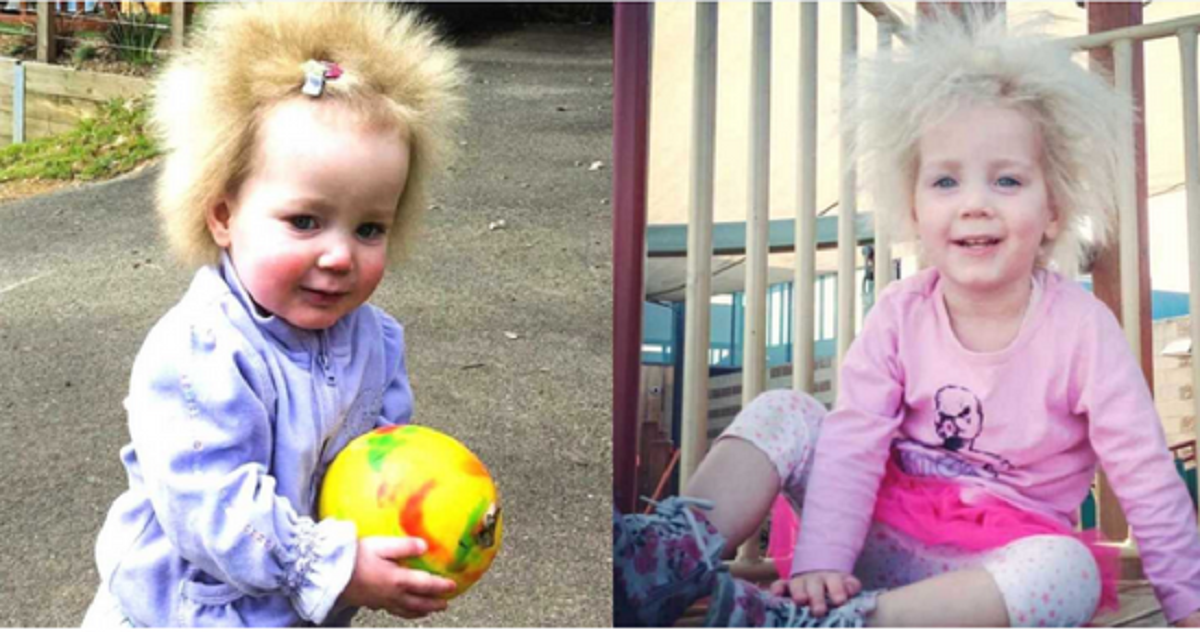 Every child is special when they are born, but some stand out more than others. That is just the way it is. However, it doesn’t follow that toddlers with varied looks are inherently “bad.” Like in the instance of Shilah Madison Calvert-Yin, there is frequently an explanation for it.

For Shilah, however, it would be years before everyone realized that her remarkable fuzzy locks were caused by a very unique ailment…

The 12-year-old Australian from Melbourne named Shilah Madison Calvert-Yin is much like any other 12-year-old. She is a bubbly young lady who enjoys laughing, playing with her friends, and taking classes to learn new things. 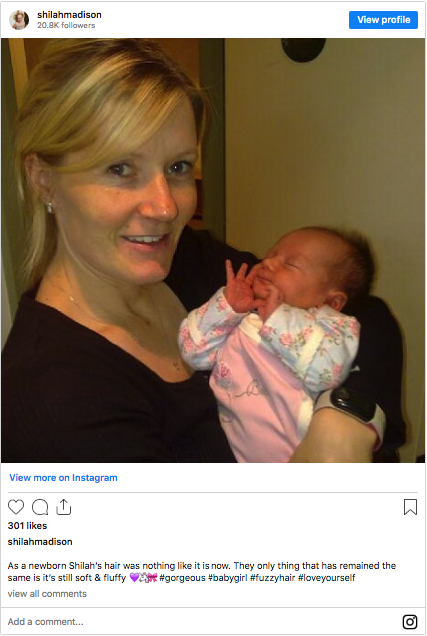 You would never know from the way this lovely young girl looks today that she formerly endured a very trying time in her life and was teased and called a “fluffhead.”
Shilah’s parents were overjoyed to welcome a daughter into the family when she was born. Shilah was born at 36 weeks after a wonderfully healthy pregnancy for her mother, Celeste.

The adorable youngster, like her older brother Taelan, was born with lovely brown hair. Her parents, however, noticed how it eventually started to fall out and was replaced with blonde locks. 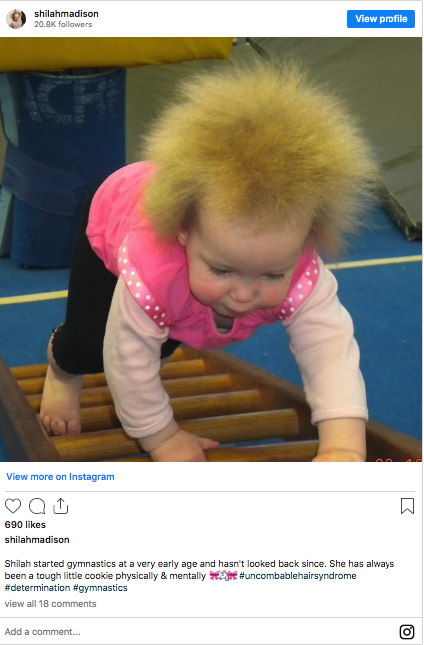 As Shilah was growing, her parents noticed that her hair was growing straight up instead of down, it was also very soft and fragile. This started when their daughter was three to six months old.

”It didn’t seem to calm or settle, but I didn’t really think anything of it until people started to make comments,” Celeste explained. 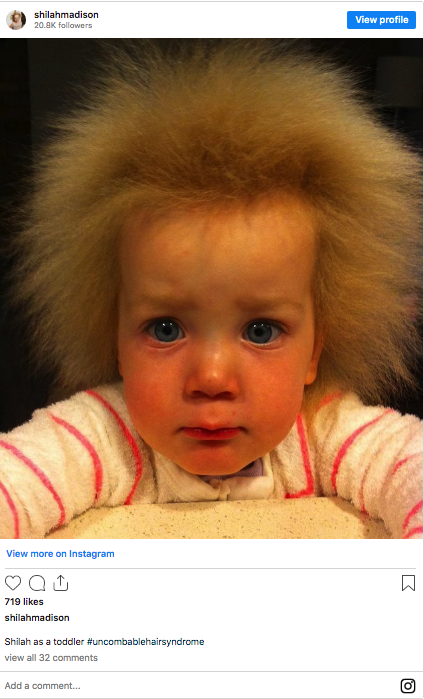 Parents frequently compare their children to others, as most people are aware. When the parents went out with Shilah, they frequently had to respond to queries since Shilah’s hair drew everyone’s attention.

Sadly, when her parents were out, onlookers would notice on her hair and inquire as to what was wrong. Additionally, strangers felt free to touch Shilah’s hair.

Her mom Celeste, who works as a teacher, explained how it felt: “It was hurtful and sometimes quite rude, but I’m sure they were just being ignorant and insensitive.”

“Then there were the people who were complete strangers that would peer into her stroller, stare at her and make comments about her everywhere we went. ‘Looks like she stuck her finger in the power socket,’ was a frequent comment,” she remarked. 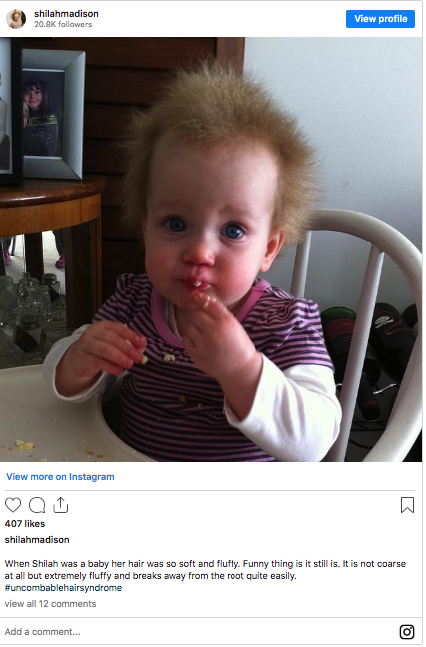 This little girl and her parents had to endure a lot – but Shilah remained strong and positive for most of the time. At childcare, she tell the other kids that she was “magical and special” and they were just “normal and boring.”

“She’d make sweet remarks like, ‘Just call me fuzzy. Some days I look like a lion with a crazy mane,” her mom said.

They had some theories, however. 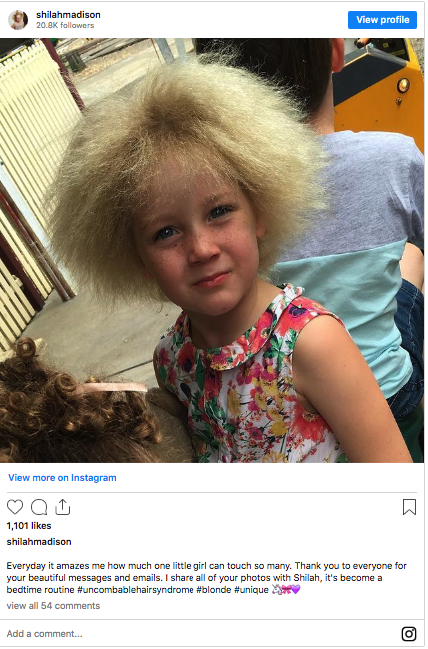 “We just assumed it was a gene from our family history and that was just that. So, we told people that perhaps it was a throwback to one of our family histories and people were okay with this explanation. Or I just said she was ‘blessed with her hair and born to be noticed.’ That was easier for kids to understand.”

But Shilah occasionally faced really challenging circumstances. Like her pals, she had long hair in her dreams. She couldn’t have a ponytail even if she wanted one. Shilah cut her own hair at the age of four after becoming extremely irate and irritated.

She had to cover her head for a while as a result. 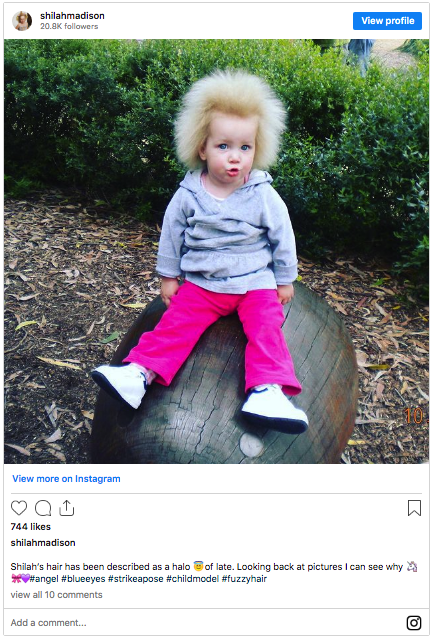 ”I was more distraught than she was, she decided that she was sick of her hair sticking straight up but when she cut short it the opposite happened and it became more spiky. That’s the only haircut she’s ever had,” Celeste said.

The mom also explained that no one knew what to do with her daughter’s fuzzy and fragile hair when they went to hairdressers. Finally, some recommended she go to a salon specialized in Afro hair.

But that didn’t help. 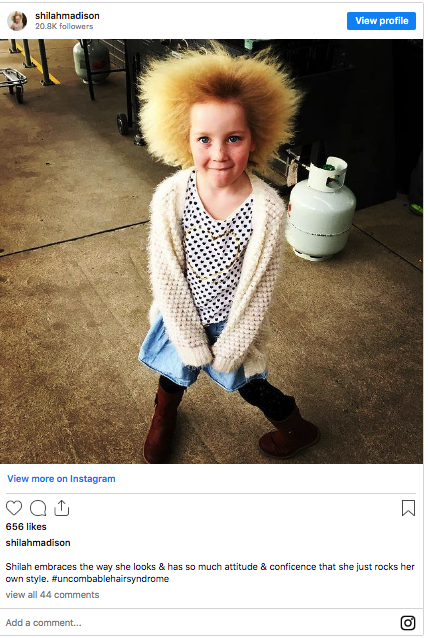 ”Her hair is not like African hair; it is still very soft and doesn’t need oil or a deep condition, and any heat treatment will break it.”

As the years passed, Celeste and Shilah learned to live with it and chose to embrace all comments they received.

“I remember one day a stranger likened her to Doc Brown from Back to the Future as she was wearing a lab coat. ‘Your daughter looks just like Doc Brown, the guy in the movie. The crazy scientist guy!’ Others often said she had ‘hair like Albert Einstein.’ They were spot on and it did become a bit of an in-house giggle for us,” Celesteexplains. 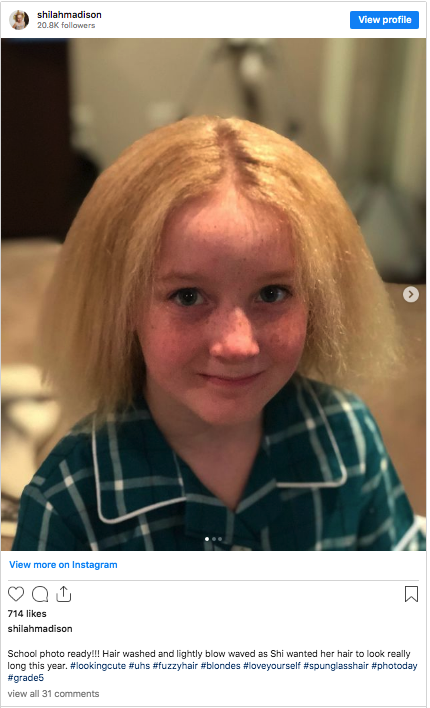 People close to the family had long advised Celeste to take Shilah to the doctor to see whether there was a medical reason for her fuzzy hair. But before Shilah went to the hospital for her teeth, the parents did not see a need.

When a doctor arrived, he approached Celeste’s mother and inquired about Uncombable Hair Syndrome, a rare condition (UHS).

“The doctor explained that UHS was caused by a gene mutation and it involves silvery blonde or straw-colored hair that stands up from the scalp and can’t be combed flat. The doctor had researched UHS but had never met a child with the condition. 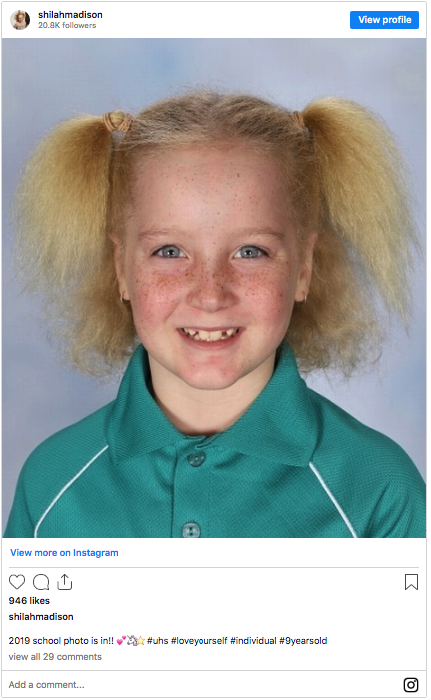 There are just 100 known examples of UHS in the scientific literature, according to Genetics Home Reference, making it an exceptionally rare condition. The disease typically manifests in childhood, frequently before the age of three. But it might also happen later in life.

Celeste was overwhelmed when the doctor broke the news to her. 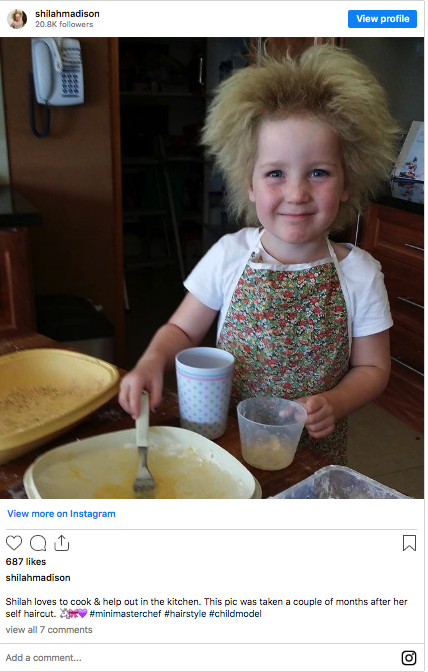 “I was shocked, teary, and excited all at the same time, finally a possible answer to all those years of questions. The doctor was just as excited.”

”You panic when you hear..”
Her condition means her hair grows differently and ‘heart-shaped’, because it’s missing a protein. Fortunately, the disorder is not going to cause any other medical conditions. Other than her teeth having weakened enamel, Shilah is perfectly healthy.

”You panic when you hear doctors talk about cell mutations but fortunately Shilah has only broken one bone in her life and now we are careful about her bones and teeth,” Celeste remarked. 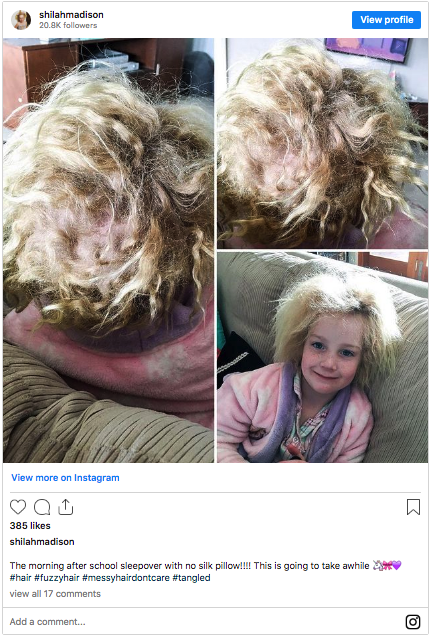 When her parents learned of her condition, they wanted to spread the word to assist people all around the world. And it’s been useful.

They have touched almost 17,000 people worldwide through her Instagram profile. 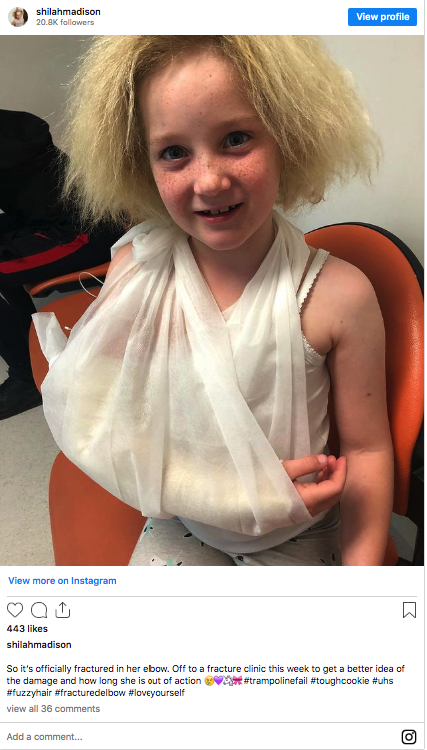 ”People are constantly reaching out for advice and sending photos of their kids in the hope that they too may have found the answer. This is truly humbling,” her mom said.

Shilah is now 12 years old, and she loves the simple things in life, like fishing, crafting, drawing, and spending time with her family.

Today, she encourages other kids to love what makes them different. 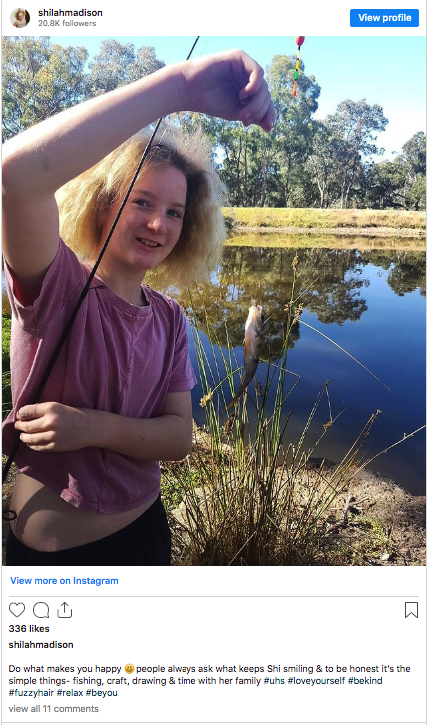 “There is nothing wrong with being different. If other people stare, it’s because they’re jealous,” Shilah says.

Her mom says their daughter is a daily inspiration, but the last years have been a bit tougher for her because Australia and Melbourne have had hard lockdowns, which has really affected everyday life. 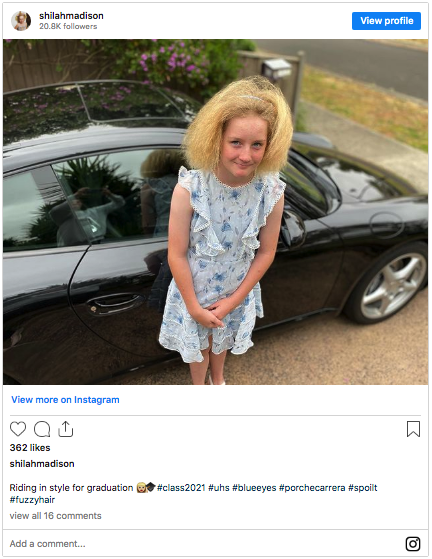 I think Shilah’s blonde locks are beautiful! She is an inspiration to so many around the world by bravely sharing her journey and putting herself out there.